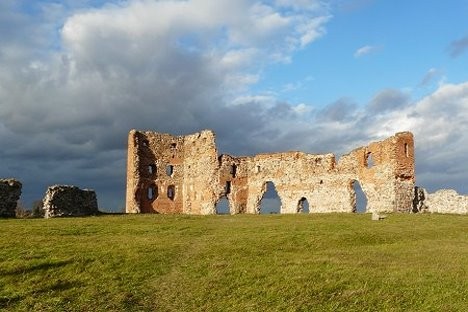 Ludza district is the Far East of the Latvian Republic. The sculptor Vilnis Titāns made a special group of sculptures “Latvia in the Sun’s sign” in honour of the 80th anniversary of independence of the Latvian Republic, marking symbolically Latvia in the map of the world. These sculptural signs were located in the Latvian farthest northern, eastern, southern and western points. Pasiene community of Ludza district is the farthest in the east and it is the first place in Latvia that says “Good morning!” to the sun in the morning. The sign “Austras koks” is located in Meikšani Village of Pasiene community on the left side of the road Zilupe-Šķaune. The sing has a latitude 56.16 North and a longitude LV 28.14 East. The district’s location (248 km from the capital) gives an opportunity to forget urbanisation, noise and cities’ smoke, to enjoy the country nature: swimming in various lakes, fishing, mushrooming, gathering berries, hiking around picturesque landscapes and of course eating fresh ecologically clean products. The are of Ludza district is 2,478.7 km2 (3.84% of the total area of Latvia). On May 1, 2004 the border of the district became the frontier of the European Union. Ludza dsitrict’s neighbours are the Russian Federation (122.6 km long border) and Belarus (8.4 km long border). At the place, where 3 countries’ borders come together at one place, a Friendship Barrow was made in honour of antifascist guerrillas of the Second World War. On the top of the Barrow an oak is growing – the symbol of the people’s friendship. There are three alleys leading from the Barrow to each of the three countries: lime trees – to Latvia, maples – to Belarus and birches – to Russia. On the state frontier there are 4 points of border control: Zilupe and Grebņeva on railways and Terehova and Grebņeva on motorways. Ludza district borders Balvi, Rēzekne and Krāslava district. Development of the district is influenced by the fact that two internationally important motorways and railways (Riga-Moscow and Warsaw-St.Petersburg) cross its territory. It gives advantages in development of tourism and transit infrastructure. From north to south the district is crossed by the road Viļaka-Ezernieki. Administrative division: 19 rural communities (parishes), 2 areas and 2 towns (Ludza – the centre of the district and Kārsava). There are 35125 inhabitants (results of the 2000 poll); 54% - Latvians, 36% - Russians, 4% - Byelorussians, 1% - Ukrainians and 3% - other nationalities.  Main natural resources are mineral deposits, soils, forests, waters, peculiar landscapes and specially protected nature objects.