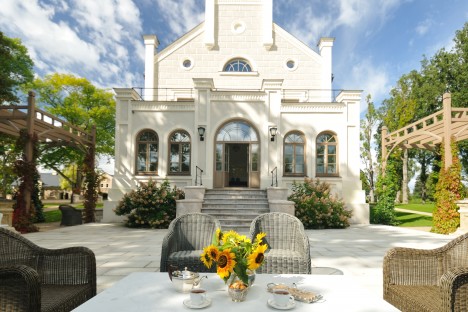 Rumene Manor is the luxury country residence of the 5 star Hotel Bergs, a member of Small Luxury Hotels of the World, and provides a wealth of activities for discerning guests from near and far, including a practice golf course, fishing, cycling, hunting and fine dining. Rumene is an ideal location for weddings, family gatherings or other private group events.

Guests at Rumene Manor are invited to step back in time into the exclusivity of a private manor house, once owned by Baltic- German nobility, with the relaxed atmosphere of country life in an unspoiled area of Northern Europe. While the estate dates from the 1500s, the manor house itself is a 19th century Neo-Gothic gem, surrounded by a 7 hectare landscaped park nestled at the shore of its own lake. The award-winning renovation meticulously restored the original manor house while also integrating all of the comforts of the 21st century.

We would be honored to make you an individual offer based on your requests regarding the Manor house as well as the Hotel Bergs in Riga. Rumene Manor is just over an hour's drive from Riga.